Supporting the victims of the flood in Thailand with NACSEA Relief

Our District Apostle Urs Hebeisen promised to help with 1’000 USD for this action.

The congregation Hua Hin, some German and Swiss members as well as friends contributed actively by donations, so that until the beginning of the action  181’000 THB , that means about 5’838 USD or 4’309 Euro (state 03.11.2011) could be collected. After agreement with the local authorities and rescue teams, the start of our help action was fixed on 04.11.2011. First it was planned to go to Utha Thani, at about 400 km. But because the flood had moved southward, the rescue team asked us, if we could go to Phatum Thani Rangsit and Ayuttaya instead of Utha Thani. Both places are situated around the north of Bangkok (about 40 km). We agreed with that.

On Friday 04.11.2011, all the goods were delivered on a market place and packed by the team of the Hua Hin congregation, the rescue team and collaboraters of P&amp;A notary. The members of the Hua Hin congregation wore a T-shirt with the logo of our Church. The 6 tons of rice were packed in 2 kg bags, then the noodles and the fish cans added. From other local donors we received sanitary items, which we put into the packs. At 6 pm everything was packed and could be loaded on the trucks which were kindly put at our disposal by the Royal Thai Army.

On both sides of the trucks, a signboard had been fixed with the name of the main sponsors. Then all the helpers went home to refresh themselves and have a rest before the start of the convoy at 01.00 h in the night.

That meant still one hour of sleep until the meeting at midnight. Seven persons of the Hua Hin congregation came to the meeting point to accompany the convoy. The night-trip with 17 vehicles, as pick-ups, trucks, 4-drive cars and an ambulance stopped at the next gas station to fill up and check the vehicles.

After 35 km we had to make our first stop on the highway because one of the signboards had been unfastened by the wind. Some minutes later the trip continued in the direction of Pathum Thani Rangsit. At about 5 o’clock we reached our goal.

The leader of the rescue team asked me to help him to check the level of the water, a hazardous attempt to drive a pick-up in the deep water. After only 500 m we turned back because the water reached the door handles. So we looked for another road and checked if the trucks could join another rescue team that could continue to reach the meeting point by boats.

At about 7.30 pm the trucks started for the meeting point, also with the helpers on them in addition. For us an adventurous but tense experience, because everybody was fully motivated. At 8 o’clock the boats met us and we loaded the goods and the teams to distribute them. It was an unbelievable scenery. With the boats we went along flooded roads, some up to 2,5 meters of water.

It didn’t last a long time until we met the first people waiting on the upper floors of the houses. We threw the packs and the drinking water to them. An unbelievable feeling for all, as ALL people living there, in spite of their distress, were still smiling and were so thankful that somebody came to them and helped them. After about 3 hours on the boats, we returned to the trucks. There the other team already waited for us to go to the next goal, Ayuttaya.

The trip to there was very difficult. For the 50 km we needed about 3,5 hours, because the people had parked their cars and personal belongings on the higher situated roads and bridges in security. Some roads were already flooded and made also our progressing difficult.

Nevertheless, we all arrived safe and sound at the next meeting point. The trucks were unloaded and the goods loaded on 4 boats. All those who had not been on the boats at the first point went now on the boats so that the others could have some rest or a nap. Here also the same scenery as before. The way to the intervention place lead us over up to 3 m flooded rice-fields in order to reach the people in distress. They were all so thankful and happy for our help. The distribution ended at 6.30 pm at twilight on Saturday- Then we went back home.

We needed again about 3 hours to cover the 30 km long emergency area, because it is more difficult to drive on the flooded roads by night. 15 minutes after midnight on Sunday morning we arrived safely at our original place Hua Hin.

It was a very intensive weekend and really beneficial after having  seen the thankful faces of the people who got in distress.

We are going to invite soon all the participants for a special “thanksgiving service” with the purpose that the people become acquainted with our Church. We hope that with our modest action we have been able to bring a little help. 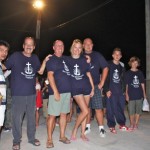 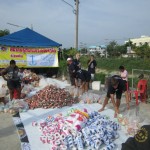 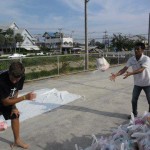 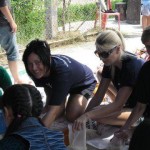 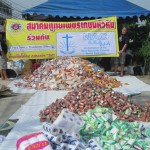 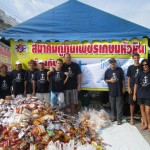 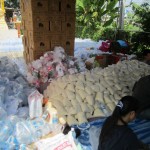 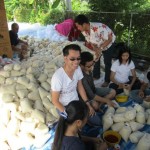 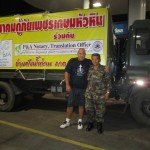 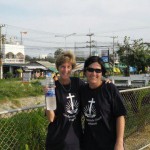 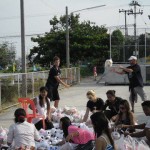 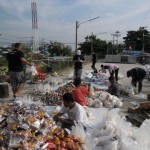 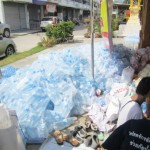 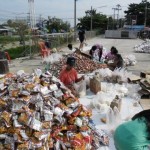 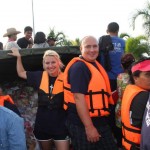 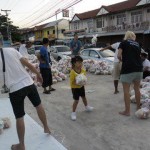 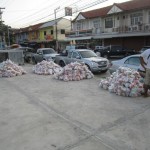 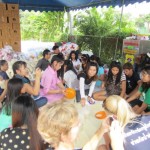 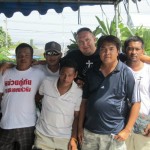 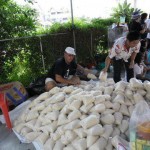 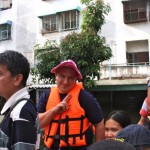 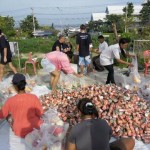 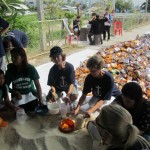 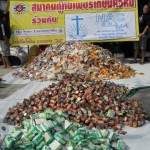 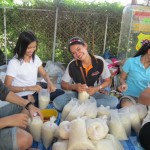